Sunday’s section of this week’s Sabbath School lesson states, “In some cultures, there is a tendency to distrust and challenge leadership; in others, to blindly submit to it. How has your own culture’s attitude toward authority impacted the church in your area?”

In an interview with David Frost, Richard Nixon, a former United States President, forced to resign due to a scandal, defended himself by saying, “If the President does it, then it is not illegal.” This bold statement shocked David Frost, and every other competent thinker! I suspect that in the United States, people really started to question their leaders after Nixon’s downfall.

I believe we keep a healthy balance of respect for leadership, without blind submission, when we ask for accountability and checks and balances. In the United States we have a constitution the President must hold to. The Constitution also declares who ultimately has the authority. It reads, “We the people.” Not “me the President” or “me Thomas Jefferson, or James Madison, or Ronald Reagan or Barack Obama.” The power and authority of the Constitution comes from “The People!” Therefore our president is not above the law.

In the church we have the Scriptures as our sole authority, and our leaders must be held accountable. And the church as a body has authority, ”God has ordained that the representatives of His church from all parts of the earth, when assembled in a General Conference, shall have authority.” –Last Day Events, p. 56. Just as in the United States, the President is not above the people, the church leaders are not above the church.

“The church is built upon Christ as its foundation; it is to obey Christ as its head. It is not to depend upon man, or be controlled by man. Many claim that a position of trust in the church gives them authority to dictate what other men shall believe and what they shall do. This claim God does not sanction. …. Upon no finite being can we depend for guidance. The Rock of faith is the living presence of Christ in the church. Upon this the weakest may depend, and those who think themselves the strongest will prove to be the weakest, unless they make Christ their efficiency. “Cursed be the man that trusteth in man, and maketh flesh his arm.” The Lord “is the Rock, His work is perfect.” “Blessed are all they that put their trust in Him.” Jeremiah 17:5; Deuteronomy 32:4; Psalm 2:12.- Desire of Ages, Page 414.

Many years ago, I heard the testimony of a church leader, defending himself for some shady deals, saying his boss told him to do it, therefore he had no choice but to obey his boss who had “authority.” I am sure Joab was thinking the same thing when King David told him to put Uriah on the front lines of the war. Please read what God’s messenger has to say about Joab’s rationale.

“And Joab, whose allegiance had been given to the king rather than to God, transgressed God’s law because the king commanded it. David’s power had been given him by God, but to be exercised only in harmony with the divine law. When he commanded that which was contrary to God’s law, it became sin to obey. “The powers that be are ordained of God” (Romans 13:1), but we are not to obey them contrary to God’s law. The apostle Paul, writing to the Corinthians, sets forth the principle by which we should be governed. He says, “Be ye followers of me, even as I also am of Christ.” 1 Corinthians 11:1. –Patriarchs and Prophets, Page 719. 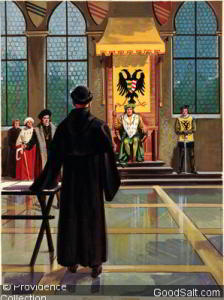 We need to be respectful of authority, but we need to remember where authority ultimately comes from. And while respecting those in leadership, and even being in leadership, we must remember we are accountable to the Scriptures and God’s church, of which Christ is the Head. Even Martin Luther, the author of the Protestant Reformation, tried his best to be respectful of the leaders of his church. It was not his goal to start a new church, much less a movement that would change the globe. He sought to bring his leaders into harmony with the Scriptures, and it is only after his efforts to work within his church failed, that he had to make a choice between allegiance to God or allegiance to his leaders. Martin Luther was loyal to the only One who loved him enough to create him and die for him. Likewise we should make every effort to submit to our leaders as far as we can without being disloyal to the One who died for us.

I would also like to share a parting thought. In my years of gospel work around the country, I have met people who are afraid to speak up in board meetings or church business meetings, because they feel they are too young or poor, and their influence would not be felt. I have also observed people abusing their age or money to hurt others. I would like to encourage all—no matter how young, old, rich or poor you are—you need to speak your mind in these meetings. And, no matter how young, old rich or poor you are, you need to be nice when you do. Everyone has a right and a responsibility to speak, and everyone has a responsibility to be nice when they do so.